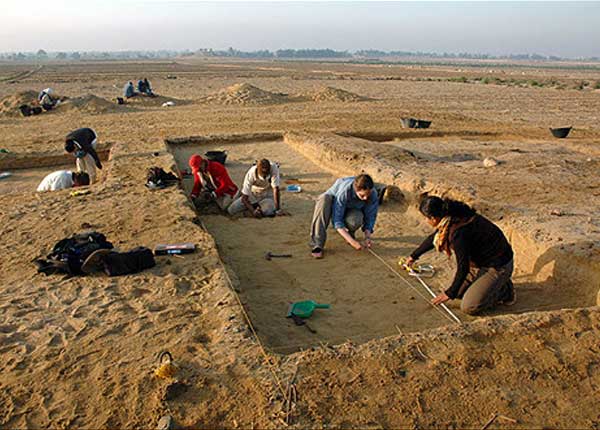 A team of US archaeologists has discovered the ruins of a city dating back to the period of the first farmers 7,000 years ago in Egypt’s Fayyum oasis.

“An electromagnetic survey revealed the existence in the Karanis region of a network of walls and roads similar to those constructed during the Greco-Roman period.”

“The artifacts consist of the remains of walls and houses in terracotta or dressed limestone as well as a large quantity of pottery and the foundations of ovens and grain stores…and date back to the Neolithic period between 5,200 and 4,500 BC.”

As incredible as it is for us to peer back into the history of human civilization, also amazing to me is that this is now accomplished using sophisticated modern technology. The ‘airborne electro-magnetic survey’ is a method of measuring the structure and composition of what’s underground.

In the case of this discovery, the data retrieved allowed the archaeologists to detect the presence of ordered stone structures not visible from the surface. While this takes a bit of the mystique away from digging for years to find something, it also prevents archaeologists from wasting years of their lives searching instead of studying.